The Newsletter of The Queen’s Own Cameron Highlanders of Canada 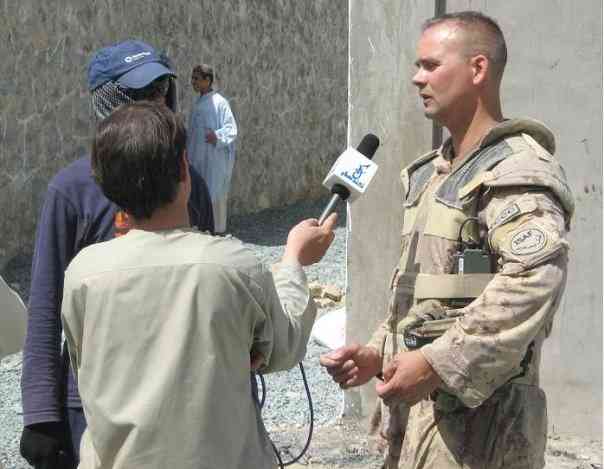 Boots on the Ground 5

Hello again to friends and neighbours throughout the Parkland. It has been awhile since my last dispatch, however everything is going well for me and the lull has been due to the busy workload and operational tempo. Since my last dispatch I have returned to my area of responsibility in Panjwayi and have had the opportunity to participate in various activities and operations over the past month. The Provincial Reconstruction Team suffered a great loss when our friend Corporal Mike Starker was killed in an insurgent ambush in the Zhari District two weeks ago. Mike, from Calgary, was a great medic and soldier and it was an honour to have known and worked with him. His helpful ways and professionalism will be missed. The accomplishments of the Canadian Forces, and (even though I’m biased) especially our Provincial Reconstruction Team in Kandahar, are what drives us to continue with our mission despite the losses and risks. The positive effects our efforts are having on local Afghans’ everyday lives are very visible now after being here three months. This is the legacy that Mike Starker leaves behind and the challenge that the rest of us will carry on with.

The poppy harvest is wrapping up now, indeed complete in most areas of Kandahar and Helmand provinces, and therefore the insurgent activity is expected to increase: “fighting season”. The illicit opium trade is a huge issue in many areas of Kandahar, especially as you get to the fringe areas of our control. It is interesting to note that, in my experience visiting many villages in Panjwayi, most of the agricultural plots growing poppies are owned by absentee land-lords living in Kandahar City or even Pakistan, rented to absentee lease-holders that live elsewhere, and are farmed by the local villagers and tribesmen who are happy to take any job available that might put food on the table for their families. As well, there are complex arrangements where the insurgents engage local producers to grow poppies by entering into dubious “loans” which include a certain amount of opium production as one of the stipulations. Agricultural assistance from the Government of Afghanistan is limited and slow in coming, non-governmental organizations and charities are very limited in operating dangerous areas, farming cooperatives are in their infancy, and bank loans are non-existent in rural areas, so many farmers see no other choice but to take up the insurgents’ offers of “assistance”. The effects of this are large percentages of total farming output dedicated to poppy and marijuana, and less to wheat and other traditional crops. This has manifested into a serious situation now, especially when coupled with the world shortages of wheat and other commodities, and food prices in Afghanistan have sky-rocketed. Many local tribesmen I speak with are now questioning the decision to support the insurgents and the illicit drug trade as they see the hardship and starvation being faced throughout the province. Afghanistan should be in a position of being net exporters of agricultural commodities, not forced to rely on international aid and assistance from their central government. The results of thirty years of war and an on-going insurgency are wearing thin on public attitudes and many locals that were “sitting on the fence” are now turning away from the insurgency.

My favourite part of working in Afghanistan is enjoying the rich South Asian culture. One of the many cultural differences involves the set-up of the days of the week. Friday is the Muslim holy day, similar to our Sunday, and is a day off from work for most Afghans. Thursday is like our Saturday, and Thursday nights are for socializing and such. The work week resumes on Saturday, which would be like our Monday. So instead of TGIF in Afghanistan it is TAIT: Thank Allah It’s Thursday! Another factor of living in a 99.99% Muslim area is the “call to prayer”. Five times a day the “call to prayer” echoes out from loud-speakers situated on top of the many mosques scattered throughout the villages and cities. The first call to prayer comes just before sunrise, so as I sit for my shifts in the observation post of our little compound out in Panjwayi, the morning calls to prayer begin echoing across the valley starting at about 3:45 am. Due to less-than-stringent time keeping and other factors, the calls to prayer blast from the loud-speakers at slightly different times from each mosque; in our valley they started at 3:45 am and the last one finished around 4:30 am. These calls to prayer are not prerecorded messages but instead the local priest or “mullah” singing/chanting into a microphone and amplification system. When one first comes to Afghanistan, if he is living amongst the local community as we are, you are awoken everyday at the first call to prayer. After a few weeks you get used to it and they don’t wake you up any more. It seems that the first call to prayer is the loudest since the villages are so quiet at that time of the morning. Later in the day they can hardly be heard over the din of everyday life.

I would like to thank those of you sending feedback via email, and I welcome any comments and questions; I will attempt to answer them all via this column. I would also like to thank the Dauphin Herald for this opportunity to share a different point of view of the Canadian Forces’ work in Afghanistan than is normally presented in the media. I have had the opportunity to interact with many reporters from different organizations and countries and although their intent is usually honourable, often they work under constraints which don’t permit them to develop the situational awareness to get to the underlying issues behind the headlines. Some of the best and most informed reporters, however, come from Canadian national media corporations, another thing we can be proud of as Canadians. As usual, I can be reached at my civilian email address: [email protected] Enjoy summer as it hits the Parkland. Yesterday the thermometer in our compound, which goes to 50 degrees celcius, exploded as it was forced beyond its limits. And I thought it was hope in March!
– Sgt Tim Seeley
Panjwayi, Kandahar Province
Afghanistan

P/M John Dawson is out and about too: 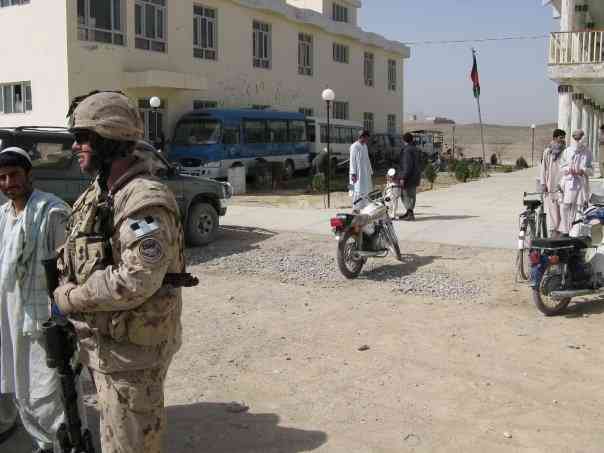 Not too much new to report here. The Association needs the help of any former Cameron as the WW 2 Camerons are fading fast. 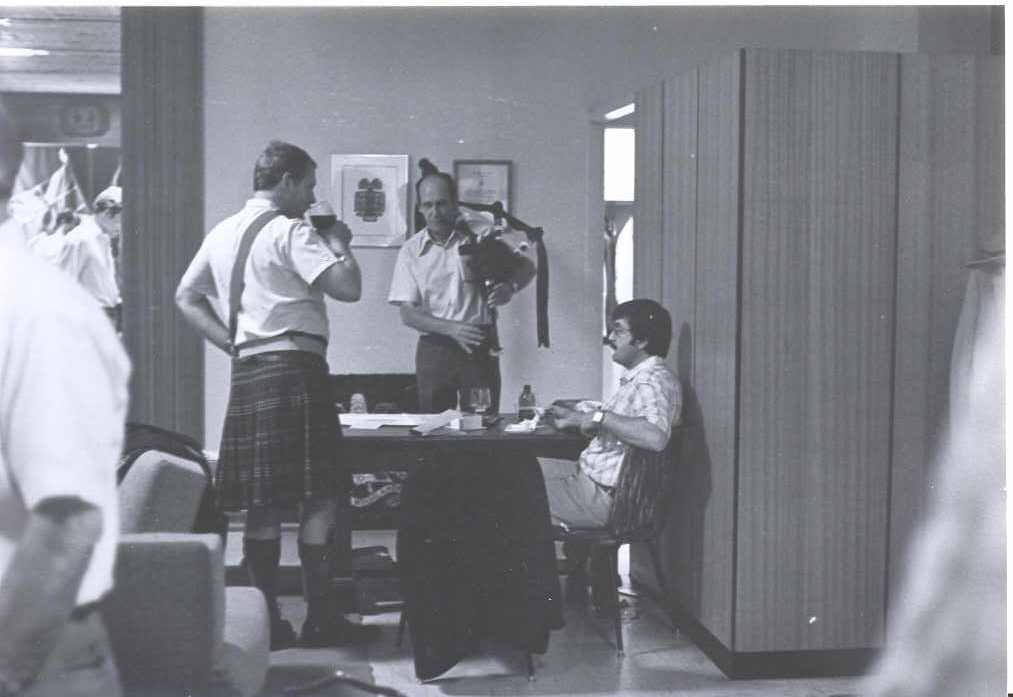 WW 2 Cameron Len DeCosse tours Dieppe for the 65th anniversary of the Raid. Len was with the Bn Mortars and has some great stories for us. 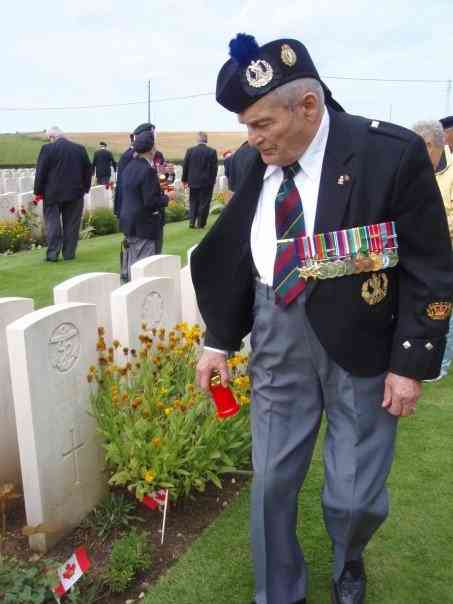 Been here now for about three months.  By the time some of you read this I will be on my way to holiday in Uruguay with a side-trip to the Brazilian Amazon.  Have a short stop-over in Rio, so would like to get up to the statue on the hill, and an overnight in Sao Paulo.  On the way back I have an overnight at Heathrow so hope to get to Stonehenge.

Unfortunately we hand another ramp ceremony before sending out this email.  The rocket attacks continue, about one or so a week on average.  This week it has been almost every day with three or four last night.  Sometimes two nights in a row, then nothing for awhile.  Still working 10-12 hours a day.  Get up, go to work, sleep, get up, etc.  Temperatures here are now 37-40C, and getting warmer every day.  Get the occasional thundershower with lightening, helps keep the dust down.  The dust is a constant haze reducing the visibility, sometimes quite a bit.  Have seen drifting as well as blowing sand with the high winds.  We are, of course, breathing all this dust in.  Flies are always bothering you, unless you shut the doors and turn on the air-conditioning.   I think we all have our personal fly-swatter here.

Amazingly we do have a few big trees in our supply compound with bunches of birds roosting.  Don’t see snakes here as the ground has been covered in crushed rock – I don’t think they like the sharp edges on the rocks, though there was a report of one in the compound last week.  There are cats around the compound that keep the rat/mouse population near zero.  Besides the dust in the air when the wind blows the wrong way we get the fragrance of the sewage lagoon wafting over the camp.  Luckily the prevailing winds have changed as summer progresses and it doesn’t occur near as often as before.  Those of us living the in the BATS have portable shower units and Port-A-Potties to use.  We use the same thing where we work and they put in foot-pump hand wash stations last week.  Before that we just had hand sanitizer.  They dug a hole about a month ago in front of the BATS and have spent all this time putting in rebar and forms to pour cement for a permanent holding tank so we can get more “permanent” showers and flush toilets installed.  At the rate they are going it be ready about the time our rotation of troops leave to go back to Canada.

We finally got a small satellite dish working so that we get the Canadian Forces Television.  It also has a Euronews channel that has a lot of world news (contiuous broadcast) whereas the CBC/CTV news comes on when we are asleep (9-1/2 hours difference DST).

Have fun every one and will talk to you when I get back.

This is the first of what I hope will be many more. It can only survive if you are interested. Let me know what is going on with your piece of the Regiment – all entries will be accepted and vetted. I will use what I can.

Special note –More on “A” Coy doings next time out. There isn’t much from Sgt Will Worden at the moment he’s too busy being a daddy, and Sgt Matt Lumsden is making sure that the FGH/Sask D Convoy Escort Troop don’t get into Taliban Trouble.